The donkey is a very idiosyncratic and rather quiet creature. There is enormous strength in him. At the same time, he can sound the alarm when something is wrong. 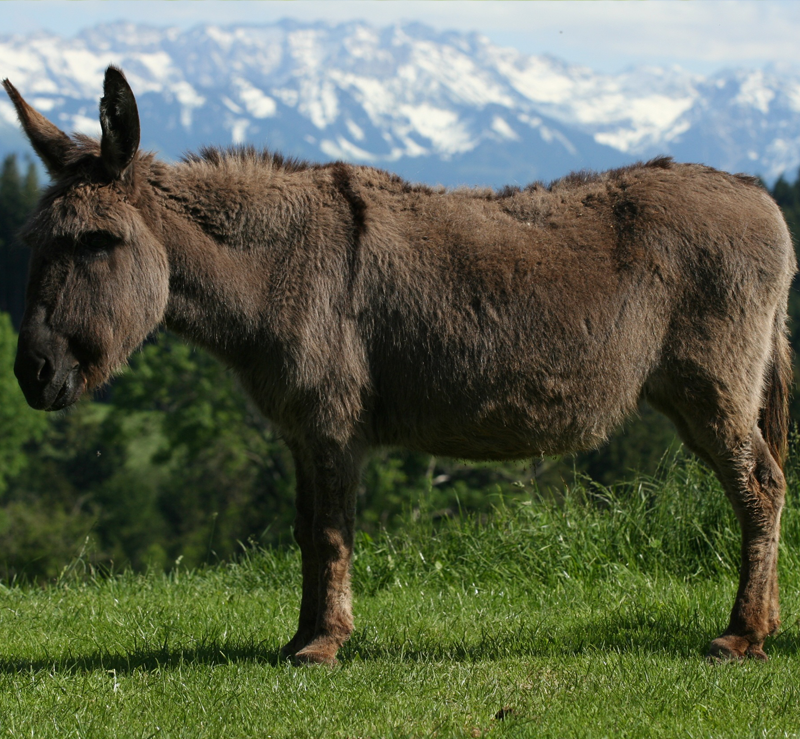 The donkey is cozy and is perceived as quiet or leisurely. Many describe him as stupid and lazy. His willfulness and stubbornness is often associated with his intelligence. In fact, however, he has a headstrong character and personality that are not always mainstream. Those who manage to deal well with the donkey will find in him a very sensitive, powerful and faithful companion. He picks up loads, struggles along at his pace, and gives early warning of the unfamiliar or of danger.

The mule is used as a draft and pack animal due to its existing endurance and robust nature. In addition, it is just as suitable as a horse as a mount.

The power animal Donkey wants to let know that slow and well thought out decisions should be made. Hectic or hasty decisions can be unfavorable. Who thinks that he has not used a good opportunity fast enough, is pointed out by this power animal that everything takes its time and speed can be a disadvantage.

The donkey is a very sensitive creature. He puts himself in the way to make clear what is no longer possible. He is stubborn and ornery. He ignores instructions. Only when we have learned to recognize ourselves and our innermost being is the time ripe to take the next steps. Until then, the donkey shows us that the way is blocked.

The donkey sounds the alarm by loud screaming when negative energies appear. He goes through life with full physical effort. Despite his great effort, he remains calm and acts with deliberation. The vital force seems to have no end until the time of negativity is over.

This animal carries great burdens, moves sure-footedly, and masters even difficult paths. Sensitivity and psychic abilities increase. Creativity and a strong confidence are also expressed by this power animal.

The power animal is often intellectually underestimated. Laziness and stupidity are attributed to him instead. He is perceived as stubborn, willful, unpredictable and naive. The environment does not understand his behavior. The patterns of his personality are classified as exhausting and energy-sapping.

As soon as the donkey wants to communicate something on the energetic level, there is a lack of balance between the inner experience and the outer resonance. Mutual understanding is missing and therefore the behavior among each other is disturbed.

The donkey wants to tell the dreamer that planned goals cannot be achieved as imagined. Disruptions are to be expected, so that delays may occur or a new plan must be drawn up. It is not always possible to put the desired plan into action.

There is a discrepancy between self-perception and the opinion of others. The donkey warns against continuing on a path that will not be beneficial or successful.

Those who manage to overcome their own mental and physical inertia will successfully overcome problems in their lives. For a long time there seems to be a subject area in the life of the person concerned that is perceived as difficult and unpleasant. A solution appears for the one who moves creatively and sets new goals.

The dreamer is supposed to check his own behavior through the donkey. The outside world perceives him as lazy, stubborn and self-willed, no matter how much burden he thinks he is carrying. Misunderstandings increase and life becomes altogether more difficult. Strife approaches, which can be classified as destructive.