The cobra is a symbol of healing or healing power. The animal writhes along a staff and looks with her gaze forward at the viewer forcefully. It expresses the rising energetic power. 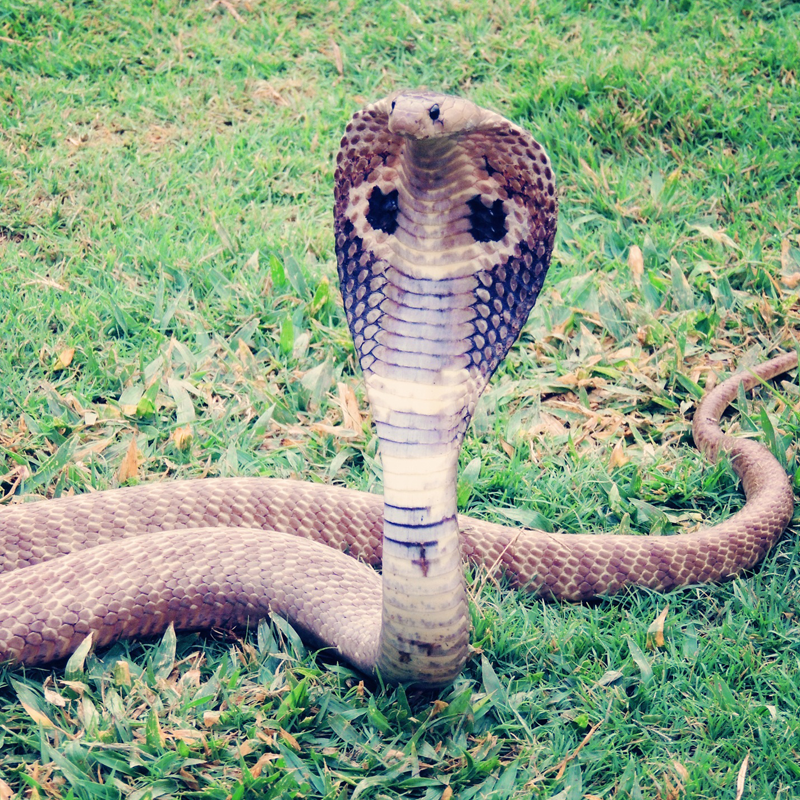 The word cobra is from Portuguese and means snake. The external appearance in the area of the neck and nape distinguishes the cobra from its conspecifics. As soon as the animal stretches up, a loosely fitting skin becomes visible, which can be deliberately spread.

The way of life is like other snake species on the ground or in water bodies. Often the animals hide in burrows and dens of their prey. There they hide so that they can quickly escape in a threatening situation. If escape is not possible, the cobra straightens up. This peculiarity led to the fact that the snake is often displayed by so-called snake charmers.

The animals are kept in the dark and blinded by the sudden daylight. The flute is used to distract and visually stimulate the animal. The sounds are not perceived, but by the movements of the flute, the cobra follows the flute and gives the impression that it is dancing.

The power animal cobra symbolizes the energetic healing power. Therefore, it is understood as a symbol of luck and healing. The inner power rises and finds a new strength. The principle of kundalini energy can be applied. The animal teaches how to establish the energetic flow through upward and downward movements. The timing of activity as well as retreat is expressed through the power animal. Life is divided into rhythms and cycles. Wave-like movements ultimately lead to the desired goal.

The power animal makes it clear that an energetic change is imminent. The old used up energies are stripped and supplied to the mother earth. The time for new growth has come. The next steps should be upright and resting in oneself. A cobra radiates charisma, pride and awe. These attributes come to life and are part of a new strong force field.

The cobra represents at the same time the falsehood, deception and abuse of power. The animal can kill enemies or adversaries with its own poison. Sudden and abrupt is an attack from ambush. Therefore, careful consideration should be given to whom can be trusted. Retaliation and acts of revenge are possible.

In dream interpretation, the cobra is a symbol of transformation and spiritual healing. Emotional injuries and wounds belong to the past. Sexual power undergoes renewal and allows new sides of the dreamer to come to the surface. The inner power gradually begins to spread through the organism. It flows through all areas and stabilizes.

The dreamer will experience a sense of renewal and stabilization in the coming period. Hidden abilities come to the surface and strengthen the well-being. Enemies and adversaries can be successfully put to flight.

If the dreamer has incurred the displeasure of others, he must expect resistance. An ambush or a trap threatens. The poison of the cobra can lead to the fact that planned ventures fail or plans can not be implemented.