The Kinkajou brings strength and enjoyment of life. In addition, he exhorts to wise decisions and a skillful approach. 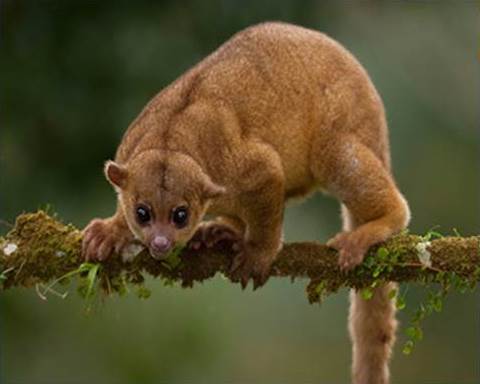 The Kinkajou is also called honey bear. The first name is due to the fact that they often cling to branches with their tails, which gives them a better hold in the trees, or they simply hang upside down. The second name was given to them because they feed on nectar from bees‘ nests or flowers. Since they reach it thanks to their long tongues, watching them is like watching an illustrious spectacle.

The climber belongs to the family of small bears, is a subspecies of canines and related to martens. Visually, the animal resembles a mixture of monkeys, raccoons. The nocturnal animal lives mainly in trees and is vegetarian. Voluntarily, the animals do not move on the ground, because there they would be too vulnerable to attack. Honey bears live in the tropical rainforest, in the south of Mexico and thus in South America. The predators sometimes gather in tree hollows and perform fur grooming together, play with the cubs or eat in community. The groups mark their respective territories by setting scent marks.

The power animal kinkajou brings the sweetness of life. From now on it will be more pleasant and the view will be more focused on the enjoyment of life. It does not take much and the important matters are done with pleasure. As soon as it becomes necessary, assertiveness increases and self-confidence grows. A change of perspective brings change, so that developments can be seen in a different light.

A feeling of exhilaration and carefreeness sets in. Time out does you good and can be used for regeneration. The few good friends can be relied on and shows once again.

The power animal sometimes makes one’s own expression and appearance to the outside world appear to be faithless. This may not be to everyone’s liking, but it can also be an advantage, as the demands and expectations of others are automatically lowered.

In dream interpretation, the kinkajou brings joy, independence and strength. The dreamer can count on a promising time. Skillful and nimble, he now gets ahead, because he can rely entirely on his skills.

There may not be many supporters, but the few simply do good. They provide the necessary variety and promote the work-life balance. Work and enjoyment are in harmony overall.

Those who had hoped for masculine support will experience disappointment and have to reckon with headwinds. Help is more likely to come from a female these days.