The leopard has very good instincts. The predator asserts its interests and asserts itself against almost all animals living in nature. Its fur has a very special attraction for people. 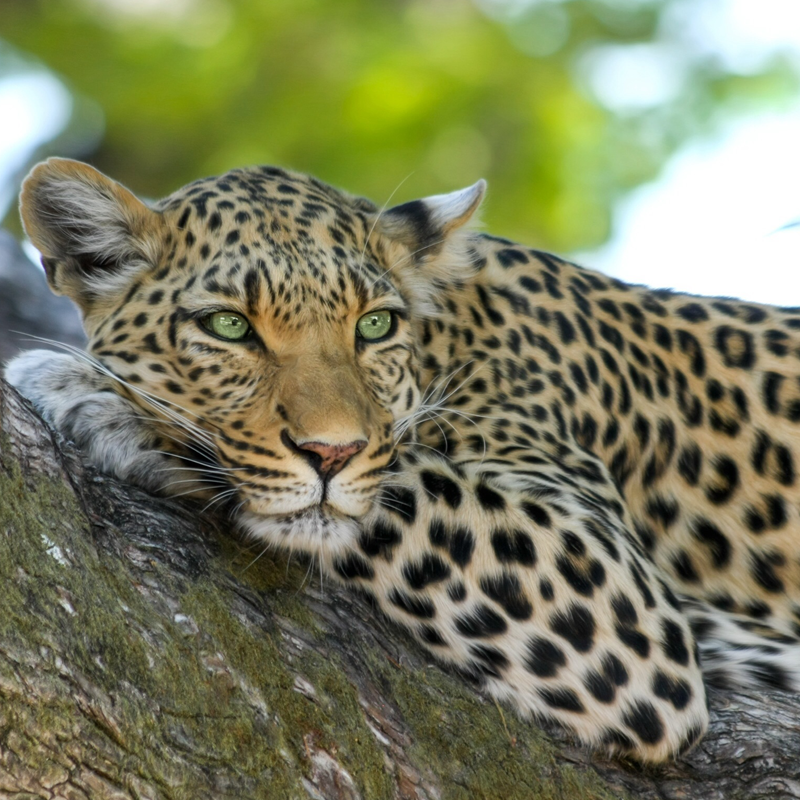 The leopard belongs to the big cats and is assigned to the subfamily of cats and the genus of panthers. Its natural enemies include the lion and other predators. From them, he must bring his prey to safety in time. He often succeeds in this, as he skillfully hangs the mammals he has killed in a tree. The big cat is found in Asia and Africa. The hearing of the leopard is extraordinary. Thus, it rarely remains hidden from him when enemies approach.

In direct comparison to the jaguar, the leopard has the smaller ringed patterns in its fur. Its forehead shape is narrower than that of the related big cat. It likes to climb trees, unlike the jaguar, and views the surroundings in a relaxed posture. Its weight is less and its tail is longer. This makes him a gallant climber. The cheetah, unlike the jaguar or leopard, cannot retract its claws. From the eye to the mouth he has dark lines on the face.

The leopard’s fur patches look like rings that are light on the inside. In the jaguar, the light patches often have additional spots. The cheetah has continuous spots or patches. The spots in the fur are not ringed patterns.

Panthers, contrary to many assumptions, are not a separate species. They are jaguars or leopards that have black fur due to a genetic defect. Depending on the incidence of light, however, the typical spots of the big cats can be recognized in the fur. Thus an exact assignment of the panther succeeds.

The power animal leopard is on the one hand strong and courageous. On the other hand, the animal is ruthless and pursues only its own interests. In the energetic work the gut feeling is promoted. Those who can fully turn to their own intuition save energy and act according to the universal commandments. Calmness, meditation and relaxation get more space. This makes it possible to recognize more clearly the moments of necessary action.

Well camouflaged, quiet and resting in themselves, leopards can be found in the trees. They get an overview, are in no hurry and can perceive even the smallest disturbances with their hearing. At the right time, the full attention is there. The power animal conveys that silence is sometimes more important than the hustle and bustle.

The quadruped does not like to give up control. Power and decisions are his alone. Talking back is not tolerated. Selfishness, aggression and sudden affect-led actions can bring discord and problems.

If the leopard appears in a dream, caution is advised. A dangerous situation is lurking, which will be discovered in time with a skillful approach. The dreamer himself or a person in the immediate vicinity show antisocial behavior. The reasons for the action are to be examined, so that light can come into the darkness.

The instinctive certainty of the predator allows enemies to be recognized in a few seconds. Even in the darkness, the quadruped is unerring and knows the way. Instinctively, the dreamer will react to words or body language of others who do not mean it honestly with him. Unconscious forces are discovered and unmasked.

The dark side of the predatory cat includes deviousness, ruthlessness and cruelty. The dreamer should check his own behavior and at the same time protect himself from others. A chain reaction can occur, which is characterized by aggression and spitefulness and destroys a lot.