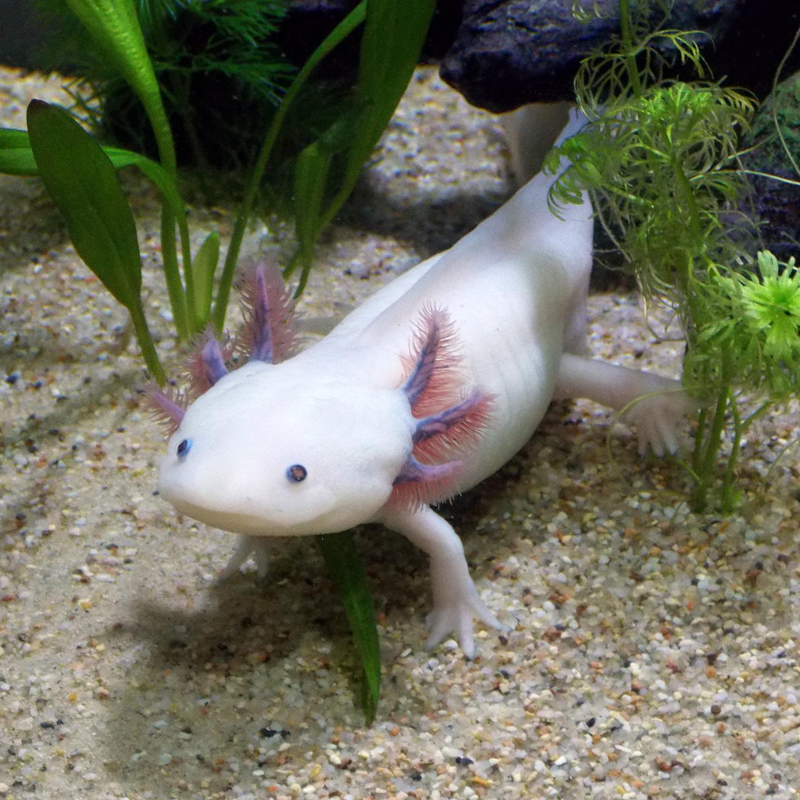 The aquatic or caudal amphibian is also known as the cross-toothed newt. The axolotl lives in a lake near Mexico City and is a permanent larva. The amphibian has the ability of regeneration of organs and limbs. Thus, it is able to restore parts of the brain or heart after damage. The newt feeds on crustaceans and small fish.

The natural color of the aquatic animal is dark and mostly dark gray or brown. The albino form is known in our region because it was often bred in aquariums. The solitary animal is in a larval stage throughout its life. The genome of the animal is about 10x as large as that of humans, making it the largest ever found to date.

The power animal axolotl brings renewal out of its own accord. Emotional as well as physical ailments can be overcome. As if by itself, problems seem to dissolve and thus bring about changes in the current life situation. The next steps will happen automatically. Neither a form of support nor a long period of energetic healing is needed.

The newt helps with lovesickness or any heartbreak over the time of hurt. The emotional pain will be lighter in a short time and soon fade away completely. An experienced disappointment dissolves as if by itself and lightheartedness returns.

Personal development seems to have reached its limits. Forward movement is hardly possible. It feels as if situations or circumstances repeat themselves and one’s own life plays out the same way over and over again, as if in a continuous loop.

If the axolotl appears in a dream, one’s own feelings and emotions play a big role. An existing grief determines the events of these days. Soon relief comes and the dreamer will feel better. It does not take much, because the improvement occurs almost by itself.

An interpersonal relationship or the connection with a partner is burdened by an emotional pain. Now it is important to listen to oneself and pay attention to one’s own needs so that a significant relief can be felt in just a few hours or days.

Unfortunately, the current pain is not new to the dreamer. He seems to be in a repetition loop and has to go through everything again. At the moment it helps to remember already existing experiences of success to get to a solution faster.